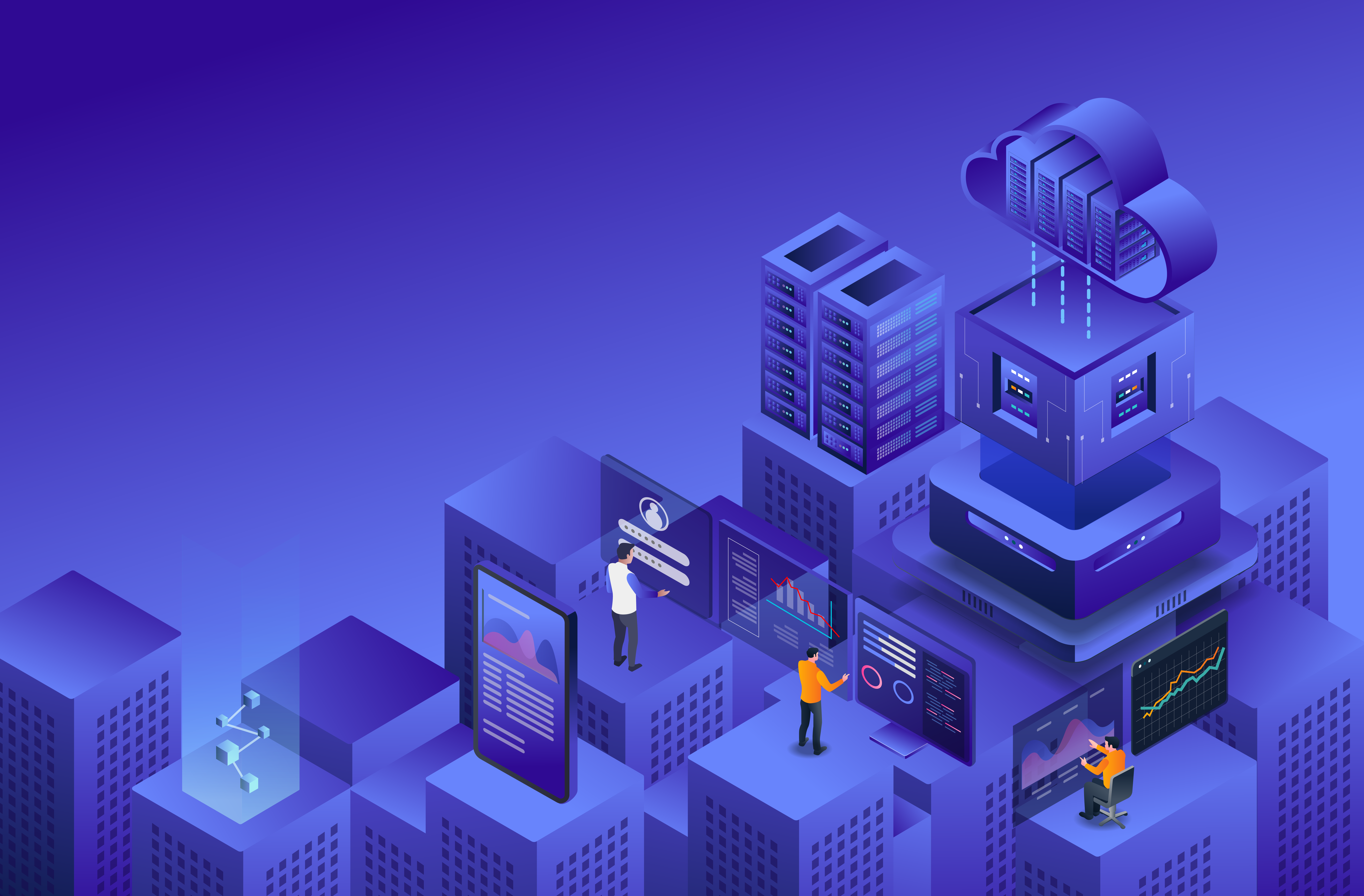 The IoT Data Edge Platform is an IoT software stack that consists of two main parts:

1. Appliance Software: Installed as a Cluster on powerful servers and deployed in a secure remote data center.

2. Edge Software: Also known as the Gateway, Edge software is installed on the standalone machine. It is deployed closer to the source sensors. One or more gateway collects data from the sensors and sends it to the appliance for further processing.

The primary objective of this blog is to give you a methodological approach of right sizing the IoT Data Edge Platform servers and Pod configurations to achieve maximum data transfer rates safely. A right sized server is important to achieve maximum ROI at an optimal system performance.

By executing performance tests in a methodological way, we can ascertain the perfect server size to deploy the IoT Data Edge Platform and find the answer to the following question:

By executing performance tests in a methodological way, we can ascertain the perfect server size to deploy the IoT Data Edge Platform and find the answer to the following question:

Setting up the Infrastructure for IoT Data Edge Platform

Before we learn the methodological approach for right sizing the IoT Data Edge Platform Servers, we should briefly understand the setup and deployment configurations. 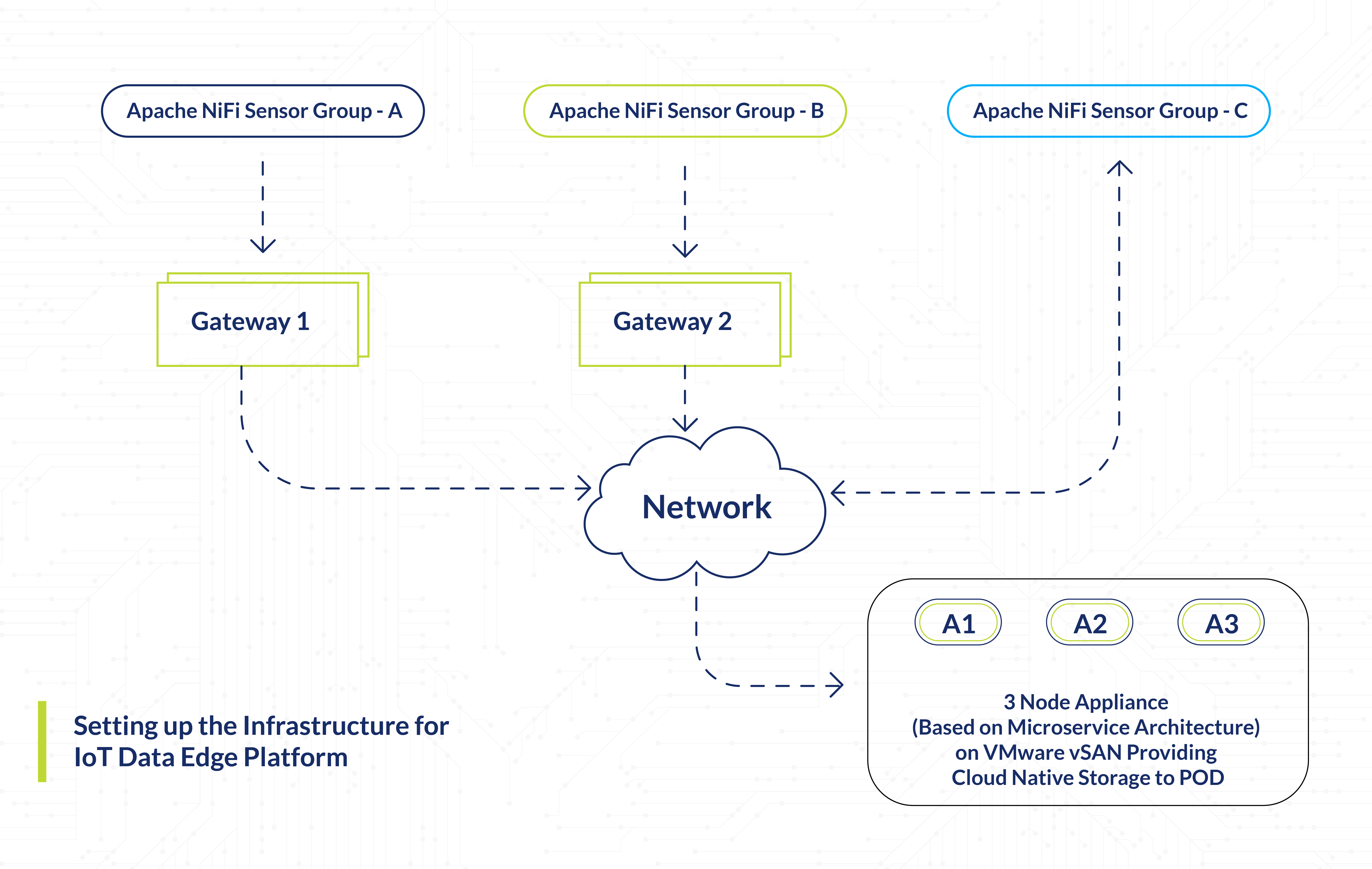 The IoT sensors register into the gateway and one or more gateway registers into the appliance.

Apache NiFi is an opensource software for automating and managing the data flow between systems. As compared to other commercially available tools, Apache NiFi is recommended, as It helps us simulate the IoT sensor by sending data to the appliance in desired data format (JSON & Influx data format) and desired IoT protocols like AMQP and MQTT. We can also easily control the data transmission rate using Apache Ni-Fi.

The high-level approach to right sizing the server is: 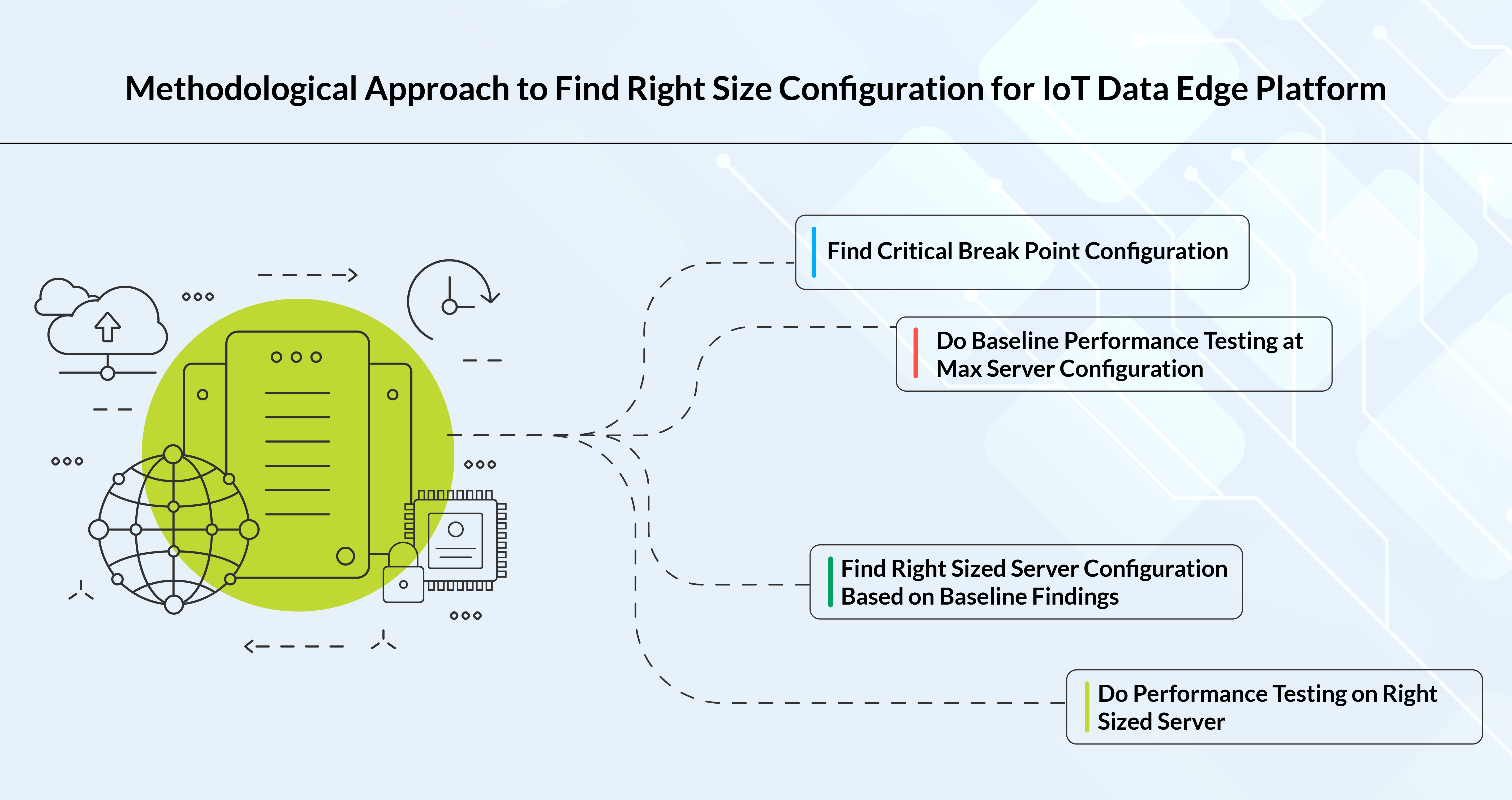 The way to find this by looking at the minimum resources (CPU & Memory) requirement of each pod and then summing up the values or you could do trial and error by reducing the Virtual Machines configurations. As an example, the minimum configuration to successfully start all the service Pods of the IoT Data Edge Platform is 12 CPU and 32 GB RAM.

Furthermore, if we observe message loss or message queuing up rapidly and there are still enough CPU & Memory resources available, then we reduce the data transmission speed from Apache Ni-Fi.

By increasing the CPU & Memory of the Pods or by reducing the data transmission speed Iteratively, you would reach a point where data could be safely handled by the IoT Edge Data Platform.

Once, you achieve a stable transmission speed, make a note of the total CPU and Memory consumption of the Virtual Machines. Thus, we find out the Right Size Server configuration after few iterations. The most important point to be noted here is that there should be no loss of transmitted messages, or the messages should not be queued up in the message broker.

With the help of a right sizing methodology explained above, businesses can decide the perfect server configuration that can handle the IoT message load safely and optimally. Thus, enabling your business to achieve maximum Return on Investments (ROI) at an optimal system performance.

Want to know how Xoriant can help you with IoT and Edge?