Mobile manufacturers, such as Apple, RIM, Nokia and the ones based on Google Android and Microsoft Windows Mobile, have been introducing Smart Phones at a rapid pace.

An important factor that has driven the Smartphone market has been the emergence of an Application Marketplace. Each Smartphone Mobile OS has its Marketplace, where apps developers can put up their applications for sale or free. These marketplace applications are downloadable and installable on the corresponding devices and are known as Native applications. They are native because they are installed on the device, use the native look and feel of the device and use capabilities like sensors that are present in the device.

Each Mobile OS requires language/platform skills that are specific to each platform. Since none of the Smartphone platforms has a dominant market share, it is important for a mobile app publisher to release the app on as many platforms as possible. Porting a mobile app from one platform to another becomes time consuming and error prone. It also requires teams with specific platform skills. 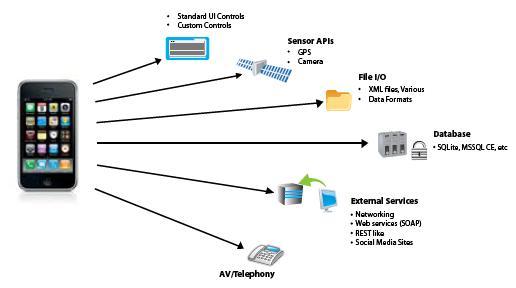 The diagram below shows the building blocks in the Xoriant Smartphone Accelerator. These blocks denote common application functionality that you would need when building a majority of mobile apps.

Xoriant Smartphone Accelerator components are configured and tuned to suit the specific features and characteristics of the specific Smartphone platform and operating system on which the mobile application is being developed. Using this accelerator, our development teams are able to modularize our applications development effort, incorporate standard application components and functions/ features in 20-50% less time than what it would take to develop from scratch. Since some of the underlying foundation has already been tested, the app quality is also significantly higher.