Maintaining quality for a common services middleware application suite is a critical factor in successful integration of any bank’s systems and rolling out of new offerings. A key success factor for any payment transformation program is to start testing earlier, to deliver early and achieve cost savings.

Payment domain applications are built on highly complex architecture which leads to complicated problems when it comes to integrating them and dependencies between subsystems, processes and infrastructure. A payment processor is a highly scalable and high throughput application designed to support the processing needs of all different types of payment schemes. It assigns end to end workflows to process the customer payment transactions.

Let us try to understand what are actually payments and a payment lifecycle.

A payment system is a set of instruments, bank procedures and usually, interbank fund transfer systems that guarantee the circulation of money. It consists of multiple applications connected via standard protocol layer following HTTP and MQ transmission modes.

When we deposit a check in a bank, it becomes a check payment, when we do third party funds transfer it becomes an interbank payment, fund transfer within the same bank becomes a book to book payment or an electronic payment and so on. What happens with these payments which we make? How do we finally get the account status saying “Your account XXXX is credited with so much amount of money”? To get answers of all these, we need to know a payment life cycle.

When the payment is punched in via frontend by a user, it is received as a stream of data bytes at payment processor. This stream of data contains all user specific confidential details, which is used by the payment processor for executing business rules, enrichment, and payment transformation, perform business validations, scheduling, and perform bookkeeping and disbursement. When the payment reaches its release date, it is finally DISBURSED to Clearing for settlement. It is now that the actual credit happens to the beneficiary account and Clearing marks the payment as COMPLETED and we finally get that SMS which we are eagerly waiting for…..!

The Challenge to start early SIT

Service virtualization solution helps to create an end-to-end virtual environment for continuous testing across the payment processor HUB and its partners. There are now service virtualization tools that allow comprehensive integration testing to happen all the time. That means less hardware and time to configure complex heterogeneous systems, making it attainable to run integration tests on each and every build.

SIT Before and After Solution

Before and after the Solution, things probably look a bit like this: 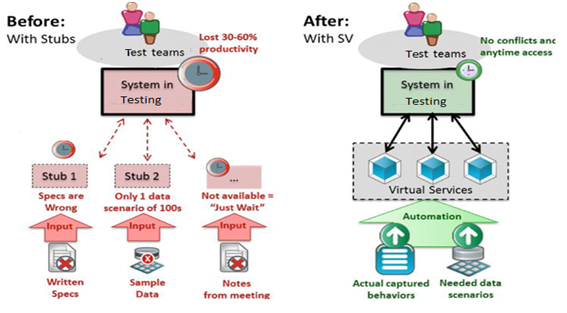 We see constant change in the testing world, with new methodologies being proposed all the time. This is good as it all is a part of moving from art to craft to science. There are many projects in the practice, in which early and continuous testing has proven to be a boon. This approach has been successful and for the payments domain with complex design and architecture described in this blog – by preventing problems instead of fixing them on a later stage.