This blog will talk about Apache Arrow, its objectives, followed by details about Xoriant’s contribution to Apache Arrow for a new feature - JDBC Adapter.

Big data ecosystem has multiple Open Source projects. There are data storage frameworks such as Apache Cassandra, Apache Kudu, Apache HBase along with data formats such as Apache Parquet. At the same time, there are multiple data processing frameworks or tools such as Apache Spark, Python Pandas, Apache Drill and Apache Impala. 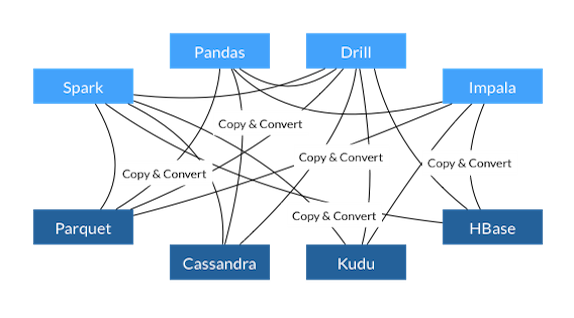 As shown above, it happens that all the mentioned storage and processing frameworks use their own internal data formats as well as on-disk storage formats. For a given data pipeline or data analytics exploration, data constantly moves between the storage layer and in-memory processing layer. During this data movement, data objects get serialized and de-serialized based on the varying data formats of the underlying source and destination systems. This data serialization and de-serialization adds a huge performance penalty in any data exploration or data analytics pipeline.

What is Apache Arrow?

It is envisioned that the data storage as well as data processing components in the data analytics pipeline, will use the same in-memory data format as defined by Apache Arrow and hence get rid of performance penalty caused by continuous data serialization and de-serialization.

What it is not?

Apache Arrow is a collaborative project across 13 other Open Source projects, including Apache Drill, Apache Cassandra, Apache Hadoop and Apache Spark. Interestingly, Apache Arrow became a direct top-level project straightaway – no incubation period like other Apache projects. It was initially seeded by code from Apache Drill.

The Xoriant team contributed to Apache Arrow for JDBC Adapter feature and completely developed and tested it. 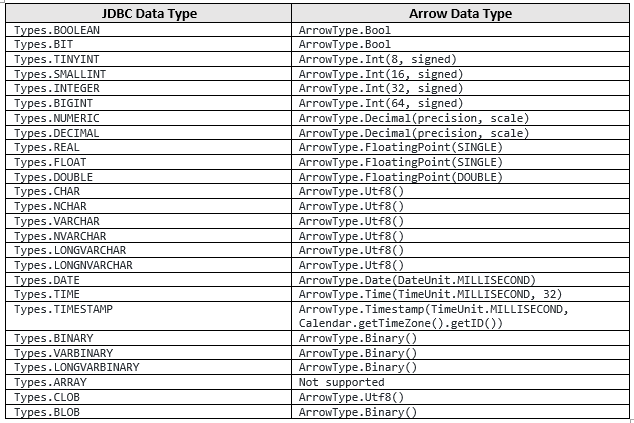 This component acts as a façade for the adapter utility.

This component contains the necessary utility code that essentially implements the following,

The source code is available at - https://github.com/apache/arrow/tree/master/java/adapter/jdbc

As per Dremio blog on Arrow's origin and history – one of the important aspects of Arrow is to bridge two different worlds of processing, for example, JVM-based environments and non-JVM environments, such as Python and C++. Apache Arrow makes it easier for exchanging data between these various environments. One particular use case for Python / Pandas environment where we can leverage Arrow JDBC Adapter is depicted below, 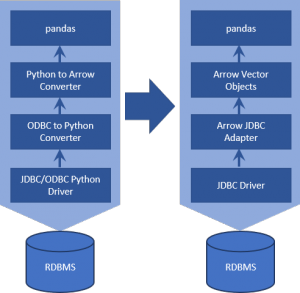 If Python / Pandas environment wants to fetch data from Relational Database, it needs to use ODBC or Python-native drivers, which are very poor in performance as compared to JDBC drivers. But the moment you introduce JDBC driver, you pay the penalty of high cost of converting JDBC objects to Python objects and then to Arrow objects.

By using the Arrow JDBC Adapter, we can now convert JDBC objects directly to Arrow objects without the serialization overhead.