Chatbots are the new conversational agents that are made available through a website or any other interface to assist customers. As chatbots use the natural method of human interaction – a dialogue, it is true that chatbots are supplanting the customer interaction space traditionally served by customer service representatives. With the adoption of Machine Learning and Deep Learning, Chatbots now come integrated with a wide range of features such as text to speech conversion, speech to text conversion and Natural Language Processing ability too.

Chatbots are not recent developments but have known to be in existence for quite a while now. However, with the advent of the internet and also rapid advancements in computer processing and programming abilities, versatility and convenience of implementation, chatbots are increasingly being embraced by businesses. It has also become achievable and beneficial to integrate Chatbots with various applications. However, a chatbot integration comes with a different set of challenges.

Chatbot testing is not just limited to delivering correct responses, but it also means providing intelligent responses from the Chatbot. Here is a comprehensive guide on Chatbot testing and the key factors that should be considered during the testing process.

What is a Chatbot?

A Chatbot, also commonly known as an agent, could also be a web-based application or accessible over other interfaces, whose primary intention is to answer a user’s query regarding a certain domain. Before the inception of Chatbots, a prospective buyer or customer would have to visit the physical store personally or write an email to the company in order for his queries regarding the product or service to be answered. So that would need him to spend time in travelling to the store or drafting an email and then waiting for a response. But with the advent of Chatbots, the user would simply fire the query through the Chatbot and the response he receives would be almost instantaneous.

This would also reduce the company’s time to get to the market and identify potential buyers or users for their services.

It does not mean that Chatbots have or can completely replace human beings because, in some cases, after the query is fired by the user, some back end customer service representatives would still be required to act upon and process those queries. Therefore in light of their efficiency and effectiveness in answering queries, integrating Chatbots seems to be a competent, powerful and productive alternative.

Advantages and disadvantages of Chatbot

Chatbots are not humans and that is precisely, the advantage and disadvantage of them.

Since most of the commonly known Chatbots are not programmed to respond like humans, they don’t have feelings or emotions. As a result, their responses are straightforward without being judgmental. However, there are Chatbots known to be in existence, which can get a sense of and understand the user’s feelings or emotions and respond accordingly. One such Chatbot is that which can efficiently answer the queries of psychiatric patients by knowing and assessing their emotional feelings and help them cope with the disease.

Human agents may let emotionality or a bad day affect their ability to work and that may get in the way for what they can do for a customer. However, Chatbots on the other hand do not have that problem.

Most of the existing Chatbots treat every user in the same way. Their responses also do not vary as per the situation. This may pose as a disadvantage because Chatbots cannot become more friendly or courteous to the repeat customers or to users who interact with them more often or alter their responses based on the situation. But this statement may not always hold true because a Chatbot can be programmed to take the users context into perspective and therefore they could be made intelligent enough to be more friendly or courteous if the situation so demands.

One of the reasons for the widespread use of Chatbots is that they have proven themselves to be money savers. Chatbots which are currently in existence account for business cost savings of $20 million globally and research shows that Chatbots are expected to trim business costs by more than $8 billion per year by 2022. By implementing Chatbots to answer customers’ frequently asked queries and leaving the more complex queries to be handled by actual humans, Chatbots would be more efficient and effective when augmented with human agents rather than replacing them.

Generally, the costs of hiring, onboarding, training, hourly pay, and benefits per agent are the expenditures that a company would have to bear in order to hire an employee. However, even after considering the initial installation and programming costs, a good quality Chatbot often costs less than the annual salary of a single employee.

Moreover, Chatbots are available 24/7, 365 days a year. By using Chatbots to handle after hour queries, companies can provide customers with the support that they need – when they need it - without having to hire additional agents to cover these odd working hours. Also, unlike human agents, Chatbots never take sick leave or paid holidays and are available even during times of natural disasters or calamities.

Chatbots are based on intents. Intent means understanding a user’s query and responding accordingly. 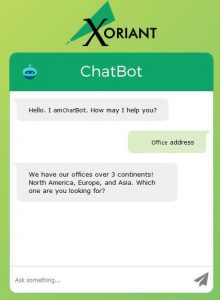 Hence, intent testing is one of the important factors in Chatbot testing. It is advisable to have a comprehensive list of pre-constructed queries along with their associated expected responses. This should be run as regression tests on each new build to ensure that intents in the response do not change.

Other than the above, following are the key areas one should consider in Chatbot testing:

The following are the primary features that should be tested on a Chatbot.