TDD is an Agile Development technique in which developers write test cases before writing the corresponding code for the user story assigned to him. Once the code passes the Acceptance test, the code is then refactored /simplified to be used as production code. TDD focuses on writing the necessary code to pass the test thus making the process simple and clear.

What is the primary goal of Test Driven Development (TDD)?

The primary goal of TDD is to enable developers to think through the requirements like a QA does before they start writing functional code and create Unit test cases to be executed on Development Environment.

How TDD is different than others?

In normal development phase, developers write code and then unit testing is performed. If any errors are observed, they are fixed by the developer. This cycle continues until the code is released to QA.

Whereas in TDD, developers write test cases first rather than the code. The test is then run even if there no code for it to make it fail intentionally. Thereafter, the developer starts creating classes, add functionalities, and so on to make sure the test passes this time. This cycle is then repeated for another new functionality. 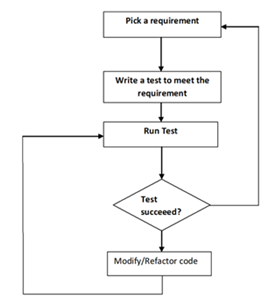 Steps involved in a TDD cycle:

Add a test case even though the code is not implemented. This helps the developer in clear understanding of the requirement before writing the actual program code

2. Execute the tests and make sure that the code fails:

If the new test fails which it should as the test case was executed without any code being written, then we are sure the test environment and test case is working fine

The next step is to write code such that the test passes. The new code is now updated as per the requirements

If every test case passes, it implies that the code meets all required specifications by the client 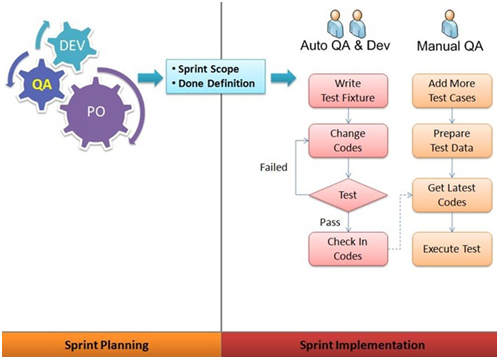 Role of QA in TDD

Role of QA - in a TDD Environment

As it can be seen, in TDD approach both developers and QA use test cases to develop their code and execute test cases respectively. So it can be concluded that the major dependency is on test cases. So writing test cases that have good coverage of requirements is important for making TDD successful. It’s known that QAs know the overall system much better than a developer as they test the system End-to-End. Therefore it is required to involve the QA team in every phase of TDD and that too from the very beginning. QA should work together with the developer to make sure that unit testing is built into the core of the application.

In the planning phase, QA will enquire customers about the acceptance criteria of each functionality. Then the QA will work together with developers to create test cases. Developers working with QA help in designing better test cases. However QA can set up the acceptance tests upfront, that are at higher level than Unit tests and thus realizing Acceptance Test Driven Development (ATDD).

ATDD helps developers in deriving Unit tests based on requirements captured as part of acceptance tests.

Developers would be using TDD to test at lower level i.e. individual units. Developers will be concerned with the functional implementation whereas QA would be concerned about the overall implementation where individual units are integrated to form the complete system. Finally QA team should be the final judge of whether or not your product meets the quality standards set by the client and your organization.

Advantages of TDD compared to traditional approach for Developers

Extended Role of QA in AGILE

Firstly, one needs to understand that TDD is not a QA method, it is a development approach.